Hi everybody! It's been a while -- I am over on my Twitter and Facebook and Google+ accounts instead. I crosspost to all three. If you plan to add me on the latter two, let me know who you are so I will accept the request. I have a long post to write for once, so even though I've been missing from LJ, this seems to be a good public place for it.

I already do the basics:

But after years of collecting things, it was still unmanageable. Whenever I was looking for a particular page for reference, I had to open a bunch of links experimentally to confirm which one I wanted -- and frequently those old pages would be dead, the information lost.

So I decided to take a new approach for bookmark management, starting over with a much cleaner slate as well as a new philosophy about reference materials.

First I went through and saved all the reference material as web clips to Evernote. That also saves the URL automatically so if I want to check the original site for updates later, I can. I filed those away under my usual Evernote tags.

My old bookmarks were mostly already in topic folders. I copied each folder (from inside the control-shift-D Bookmarks organizer so it copied them properly as lists of linked page names) into a new topic-specific note in Evernote. That way if I ever want it again later, I can get to it.

Step 3: Protect the Links to Keep in Firefox

To complete the winnowing process, I identified all the most critical links -- as in, things I actually access frequently enough that I need them handy within the browser itself -- and moved them into a folder labeled "Keep" so they aren't purged in the next step. For example, I kept the quick links to our shopping list, Gmail, OPM operating status, other stuff I check daily like the live update folders from RSS, etc.

I arranged the keepers into topic folders as before, along with a "Later" folder which is where I temporarily store bookmarks for later viewing, processing into Evernote, or other actions. (I know there are other ways to handle "read this later" material, such as Instapaper, but this approach has been good enough for me.)

Once I had archived all my old bookmarks and evacuated all the ones I planned to keep in Firefox, I deleted all the old folders except of course the one with my "Keep" bookmarks.

Step 5: Use Helpful Add-Ons for Firefox

Then I installed the MyBookmarks add-on which makes a formatted "home page" view of all your bookmarks. It doesn't look so great to start with, but if you go into your Add-Ons list in Firefox, there are customization options for it and you can even change the stylesheet.

Once that was done, I set "about:mybookmarks" as my Firefox homepage and used another add-in, My Homepage. It ensures that every time I open a new tab, the full-page view of MyBookmarks appears. (Why is this not a preferences setting in Firefox?)

The implementation steps above can be tedious, but the end result is worth it. The homepage updates automatically and gives me that preview of my favorite links to pick from. As for maintenance, if I continue the same approach of stopping to think "Wait, this is really reference material. I'll send this to Evernote instead of just bookmarking it" then it should stay clean, too.

So what do you think? Suggestions? Experiences to share?

I know I never post here anymore... any of you still around? If so, sorry. :( I tend to microblog onto Twitter/Facebook these days instead.

I had a big conversation with my husband today about our various scheduling woes of getting Buglet to school vs. when I can come home from work, my lack of sleep due to late-pregnancy (brax-hicks contractions, peeing, etc.), my tremendous lack of energy which will surely continue at least till I'm recovered from c-section surgery, the many projects I want/need to work on in Second Life meanwhile so I can keep this money coming in from there... and later, how we'll deal with scheduling for another baby later and me needing to get up in the wee hours to breastfeed.

My conclusion: the best thing I can do to address pretty much ALL that is to make good use of my time in the evenings and also to get to bed earlier. If I'm not actively working in SL or actively doing something beyond puttering around on the Web? I need to just GO TO BED early. Being well-rested will serve me well and is time well-spent; then I can get up well before Buglet and be ready for her, maybe telework, etc.

It's depressing because going to bed early, at first glance, seems like it invariably equates to a loss of free time. But it doesn't have to be a loss of quality free time. If I'm not happily tinkering away on some project, if I'm already braindead because I'm tired and just passing the time before "official" bedtime? I ought to just go on ahead and sleep.

Since I'm mobile phone intarweb enabled, I plan to tweet a lot including pictures -- see my tweets all weekend at http://twitter.com/jengagne or on Facebook. 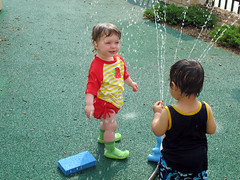 Water day at school!
Originally uploaded by Jen Gagne / Shikami
Here's a picture from Water Day a few weeks ago. There's videos if you browse forward a few, too. :)

And in other news, I was just at my parents' house with Buglet. She named all sorts of stuff in her favorite book and was generally performance-oriented! Very nice! Today's list:
Book
Duck
Moo (for cow)
Moo (for giraffe... a taller cow maybe?)
Dat (for cat and kitten)
Baby (lots of kids in that book)
Ball
Apple
Banana
Bank (for blanket, apparently)
Baba (for bottle)
Bird (outside)
Bear (for her stuffed bear)
...and a few things by color: blue, purble, ren (could be red or orange?), green.

Apparently the press is finally trying to check if this is a real risk or just a crazy theory; thankfully there've been a bunch of articles out this week debunking it. Here's what I found.

(Of course this is still a terrible disaster, but not quite THAT over-the-top terrible, at least...)

Here's the most frequently quoted basis for the scary theory, Gregory Ryskin from NW Univ.
http://www.mccormick.northwestern.edu/news/archives/313

But he has since clarified that he doesn't think his theories are relevant to the current situation:
http://www.businessinsider.com/gregory-ryskin-methane-2010-7

And this analysis gives a mostly non-panic-inducing picture:
http://abcnews.go.com/Technology/busting-gulf-oil-spill-myths/story?id=11069605\
(Although some of the other things they discuss as the basis for this myth are less than ideal.)

According to Gary Byerly, a geologist at Louisiana State University:
"The idea that there could be a catastrophic cave in, or a methane gas explosion, that's not a reasonable worry. [...] The rock formations on top of this oil deposit have enough strength that nothing like that is going to happen."

That said, the high methane levels from this particular spill aren't great for the local ecosystem:
http://www.reuters.com/article/idUSN2221822720100622

Of course, neither is the oil. But we knew that.

A while back I claimed I would post a picture of the day, and people seemed amenable to that. Shall I combine that with a "daily tweets" scenario? Might be better than me just pasting these in as infrequently as I usually do... 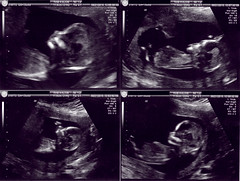 Click for lots of tweets on the new baby and more: ( Collapse )

me: I had a weird one last night that I was reading some chick's blog online, and she had a lot of video of her prized pond of all different species of regular and fancy lobsters. Underwater video, etc. And then one of her commenters randomly started to explain that he had a weird turtle fetish. I remember thinking "WTF? Turtles? And what does that have to do with lobsters?" and that was the whole dream...
2F: Dreaming about blogs is very post-post-modern.
me: I should blog about it.
2F: Yes. This is a thing that should be done.